This photograph is the property of Marlborough College .

Charles was born on 16th March 1897 in London , and baptised 25th July 1897 in Bebington , Cheshire . His parents were Charles Wilton Prangley and his wife Elizabeth Richardson , who were married in Hastings district in 1890 . His father was the son of an agricultural chemist and was for a time a silversmith`s clerk living in Liverpool , but between 1881 and 1890 he took Holy Orders and became curate of Holbrook in Suffolk . He was ordained priest in 1890 from Highbury Theological College and initially was curate of Brancaster .

Charles appears to have been an only child and sadly his mother Elizabeth died in 1899 aged 39. In the 1901 census his father and grandmother are living at Potter Heigham where he is curate , but 4 year old Charles was not with them .

Charles` father remarried in 1902 in the Kensington district to Elizabeth Reid and perhaps it was close to this date that Charles started school at South Lodge, Lowestoft . He entered Marlborough College on 1st Jan 1911 . He left in July 1915 having won a place to study at Jesus College Cambridge. He was commissioned into the Special Reserve of Officers on 11th Aug 1915 , and left for France on 13th July 1916 where he joined the 1st Battalion Lincolnshire Regiment on 19th July at Buire .

Ruvigny`s Roll of Honour says that he was killed by a shell splinter and that his Captain wrote of him “ he was a singularly thoughtful fellow in every way . He worked and led as an officer should , I had absolute confidence in him and knew him well enough to know that when the hour came he would not fail . He died facing the enemy and leading his men .”

His body was marked with a wooden battlefield cross which was brought back to his family at Bexwell . It is today in a niche in the church . He is buried in Les Beoufs cemetery . 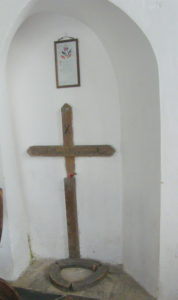 The Transport and details remained at Fricourt Camp. Three cookers accompanied the Bttn and an issue of hot tea and rum was made at 10.pm .

A preparatory artillery bombardment of the enemy`s position was in progress all day ( from 7 am) and continued throughout the night .

The 110th Brigade was on the left of 64th Brigade and the Guards Division on the right . The 62nd Brigade less 1st Lincolns was in reserve at (map reference) north of Bernafay Wood.

Our artillery of all calibres continued to bombard the enemy`s position during the morning , preparatory to the attack.

The objectives of the 64th Brigade were (1st) Gird Trench and Gird Trench support trench from ( map refernences) (Gird support trench having been almost entirely demolished by our shells .The first two waves were to dig in 150 yards beyond Grid Trench .

The attack on the first objective was to be made by the 10th KOYLI in 64th Bde right half sector , and the 1st East Yorks Regt in the 64th Bde left half sector . These two units were in position in the first line .

The attack on the second objective was to be made by the 1st Lincolnshire Regt which would pass through the two Bttns named after they had gained the first objective .

The 10th KOYLI and 1st E Yorks regiments having reorganised were to pass through the 1st Lincoln Regt after the second objective had been gained and attack the third objective .

At 12.33. pm the Bttn stood to ready to go over the parapets . Bayonets were fixed and each man carried one extra bandolier and one Mills Bomb in addition to the complement of bombs carried by the Battn and Company Bombers.

At 12.35 pm A and C Companies under the commands of Capt J Edes, and Capt J E N P Denning respectively sprang over the parapet of Gap Trench and advanced in quick time with a frontage of two platoons each company in two lines the second line 50 yards behind the first line.

The manoeuvre was carried out with the Company`s left flank “ in the air “ . The men bayoneted and bombed their way up Gas Alley until thinned numbers by heavy casualties. It was then decided to consolidate in front of the strong point . While this was being done our left got in touch with a party of the 9th KOYLI who had advanced and succeeded in occupying a line of shell holes which they had connected together . Our line was joined up to this one and the whole consolidated .

B and D companies supported by the Battn Bombers and Bttn Headquarters left Switch Trench simultaneously with A and C Companies advance from Gap Trench . Immediately on leaving the trench a heavy barrage of great intensity was opened all along our advancing line by the enemy , mainly from guns of 5.9 c and 7.7 c . Despite the fact that the barrage was highly intense and accurately ranged , these companies led by the Commanding officer Major H M C Orr marched along as if on parade without in any way having their morale shaken , for a distance of about 1500 yards. Officers and men were falling every moment . The barrage advanced with the line and further the line advanced so the barrage became more intense .

At 1 pm the two companies , Bttn Bombers and Bttn Headquarters arrived in the original front line trench greatly depleted in numbers , and it was then ascertained that the following casualties among officers had occurred :-

At 1.37 pm the barrage began to lift but enemy machine gun fire continued to play our old front line trench and it was found impracticable to advance to the aid of A Company .

Our old front line trench was now garrisoned by elements of 9th and 10th KOYLI and 1st East Yorks Regt in addition to the 1st Lincolns . The Lincolns were therefore withdrawn to the sunken road in N 32. and reorganised and afterwards reoccupied the trench and men of the other units were withdrawn at about 8 pm .

A Company had held on and consolidated the new front line which was continued by the 9th KOYLI on the left of them and by 1st and 4th Grenadier Guards on their right .

Toward midnight orders were received for the Bttn to withdraw to Switch Trench . 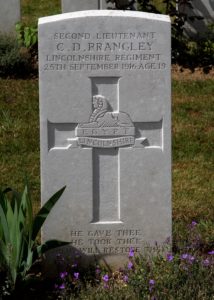 The above picture is Charles Dean Prangley`s grave at Lesboeufs cemetery.   The inscription reads. He gave thee , He took thee, He will restore thee. 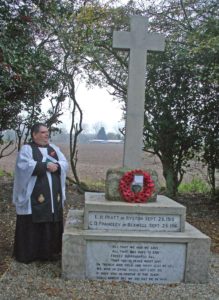 Fr James Mather at the restoration service of the memorial to Leo Pratt of Ryston and Charles Dean Prangley  2014 .

During June 1915 before his son had left Marlborough , the Rev Prangley was helping wounded soldiers here in Downham :- 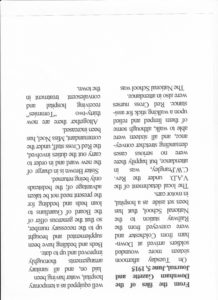 Following his son`s death the Rev C W Prangley occasioned a book , a Missal to be created to the memory of his son .   Externally it has a polished wooden cover which is made from a tree in the garden of Charles Dean Prangley`s childhood home .  The cross set on the cover is made from the gold of the wedding ring of his late mother , and at the back the lining is from her silk wedding dress.    The calligraphy was done by George Smith of Downham who was also the artist for St Edmund`s church war memorial . 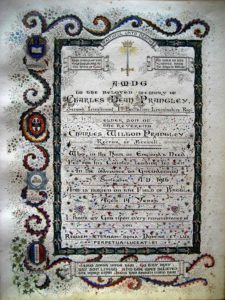 This missal was later given by the Rev C W Prangley to St George`s Chapel, at Ypres .   He also created a booklet which he intended to be sold to raise funds for the British Legion, called Quis Separabit  which is a collection of prayers and this is held in the British Library . 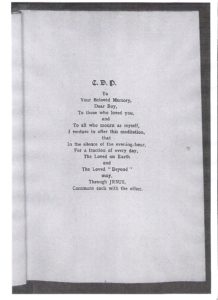 September 25th , 2016.     The 100th anniversary of Charles Dean Prangleys death was marked here at Bexwell by a gathering of friends and relatives at the Stone Cross memorial at 2.30 pm and at a Compline service in the church at 6.30.   Also commemorated was 2nd Lt Leo Pratt of Ryston who died 101 years ago on 25th Sept 1915 .   Amongst the visitors were William Bridge and his daughter who sent this copy of the telegram informing the Rev C W Prangley of his son`s death . 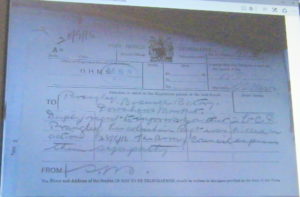